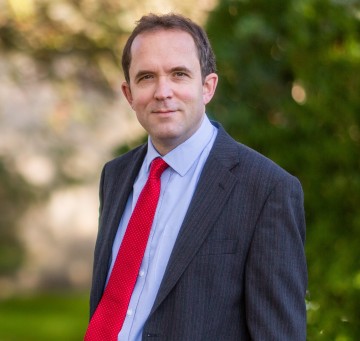 Edward Cooke is a specialist family lawyer, an accredited mediator and a collaborative lawyer. He is recognised as a leading practitioner in his field and has been working full time as a family lawyer for over 20 years.

After obtaining a degree in History at Bristol University, Edward attained his Post Graduate Legal Practice Course at the College of Law in London.

Having started his legal career at leading London Magic Circle firm Slaughter and May, he decided instead to specialise in family law. After working for 18 years as a family lawyer in West Sussex and Hampshire, he founded Edward Cooke Family Law in 2018.

Edward Cooke was ranked as a Recommended Lawyer in The Legal 500, 2022, along with one of his fellow Directors, Lauren Guy. Edward Cooke Family Law was also recognised as a Leading Firm.

'Edward Cooke has become a name associated with excellence in a very short period of time since its founding. There is a dedication to the client and a professionalism with the service offered that is unmatched in the area.’

‘Strong team in this family boutique firm that goes from strength to strength under the calm and capable Edward Cooke.’

He has built a reputation as a leading specialist in the area. He not only has wide experience in dealing with the full range of family cases, but also regularly handles complex court cases involving substantial assets, trusts, farms and family businesses.

He writes articles for leading legal publications, including “Family Law” and Resolution’s “Review” magazine, and has been involved in a number of reported cases.

Edward believes firmly in the benefits of non-court resolution. He is an experienced and accredited family law mediator and collaborative lawyer and is also qualified to meet with children in the mediation process.

Regardless of whether he represents clients in court, through the collaborative process or in mediation, he always seeks to find solutions which are constructive, child-focused and fair.

As well as his role on Resolution National Committee, Edward was a founder member of the West Sussex branch of Resolution and has sat on its regional committee since it was established in 2002.

Edward is a member of the Law Society Family Law panel.

Edward is a former President of the Chichester and District Law Society.

Edward is a member of the Three Counties Family Law Group and the Chichester and South Downs Collaborative Pod, groups of collaborative family law professionals.

In March 2018, Edward was awarded a Chichester City Council Civic Award for services to the city of Chichester and, specifically, for his ‘outstanding contribution’ to the city in leading a campaign to keep court provision in Chichester.

As a result of this campaign, the government suspended the closure of the Chichester Combined Court until alternative court provision was opened in the city at East Pallant House in January 2019, sitting on a number of days each month. East Pallant House subsequently became the country's first "Nightingale court" in July 2020, sitting full time during the Covid-19 pandemic.

In April 2018, Edward was presented with the John Cornwell Award by Resolution, the family justice organisation.

Named after Resolution’s founder, the John Cornwell Award recognises a Resolution member who has gone above and beyond in his or her commitment to Resolution’s Code of Practice, to resolve issues in a non-confrontational manner and keep the interests of any children at heart.

"I was extremely pleased with the effectiveness of your service and the way in which Edward was able to seamlessly manage my case to a successful conclusion."

"I cannot thank you enough Edward for all your hard work. I am so glad that I got in touch with you. I could not have completed this journey without you."

"Thank you so much for your time, patience and tolerance, Edward. I found your mediation to be extremely helpful, and your documentation for the basis of the financial settlement for the dissolution of our marriage reasonable, fair and equitable."

Edward grew up in Chichester. He enjoys all types of music, walking his golden retriever, running and spending time with his family.

We offer meetings (subject to our Covid procedures) at our offices or, if you prefer, appointments by video conferencing including Zoom, Microsoft Teams, Skype, and other platforms. We have been undertaking online client appointments, remote court hearings, online mediation, conferences and settlement meetings throughout the pandemic and are very familiar with using a wide range of online platforms.

To make an initial appointment please complete the online submission form in the box below, or if you would rather speak to a member of
our team directly please call 01243 769001.